The CHTS, or cylinder head temperature sensor, is an integral part of the VG30e engine design and management system. The sensor tells the ECU what the temperature of the engine is for cold start vs hot start fuel and ignition mapping. As important as this sensor is, for some reason this sensor is a weak point in the Z's electronic system and often needs replacing. It is highly recommended that the CHTS is replaced with a genuine Nissan replacement, not a third party model. I am using an Intermotor sensor in my Z and have had no problems with it as of yet, but time will tell how well it works. I have also relocated my CHTS to the upper intake manifold which uses a different sensor from a later model Nissan Pathfinder. The advantage of this swap is easier access to the sensor as well as the stock CHTS is a dry sensor which measures the temperature of the engine block, and the relocation uses a wet sensor directly in the coolant flowing through the upper intake manifold supposedly giving more accurate readings.
Part Numbers:
300zx z31 Nissan CHTS Part Number: 22630-01P01
Nissan CHTS Sub-harness Part Number: 24079-01P00
1995 Pathfinder Standard Motor Products/Intermotor CHTS Part Number: TX18

The original sensor is located just below and to the right of the thermostat housing on the front of the engine block just behind the driver side (left hand drive) cam gear. ​The replacement of the CHTS is quite simple and can be easily done while doing routine maintenance such as the timing belt/water pump/thermostat replacement, as it is located just behind the rear timing cover. It can be accessed without removing the cover, but if everything is already off while you're redoing the timing and water pump, it is an easy job to do. The video below shows exactly where the sensor is and how to replace it. The tutorial starts at 3:12 in the video

As stated above, there are a few advantages to relocating the CHTS sensor to the lower intake plenum port, namely the ease of access for future replacements. The relocation uses a sensor from a later model pathfinder ('95) which has the same connection as a stock 300zx CHTS, however the sensor is sealed as it is placed directly in the coolant, opposed to the dry sensor used in the stock location which will leak if you attempt to use the stock sensor in the relocation position.
​When I completed this relocation, I replaced the sensor and harness as one set, which is recommended as it only costs a few more dollars and the old harnesses tend to become corroded or brittle from the placement along the front of the engine block.
​
To complete the relocation, simply locate the port on the drivers side (USDM) lower intake manifold, near the front of the intake. 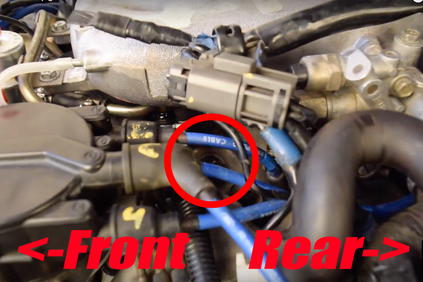 The port will either be occupied by a plug or a temperature sensor which is used for the injector cooling fans located on the passenger side of the engine on models sold in hot regions such as my Z which has lived its entire life in New Mecico, USA.
Now that the old plug or sensor is removed, the new sensor can be installed and tightened down compressing the crush washer to prevent any coolant leaks. Be careful to not over-tighten this as the intake is made of aluminum and stripping the port could cause irreparable damage.

Once the new sensor is installed, the new harness can be attached making sure to properly secure the metal clip, and then routed around the fuel pressure sensor and by the radiator cap to the passenger side of the intake manifold where the CHTS harness connector is located. Simply disconnect the old connector and plug in the new one and the relocation is complete! The old sensor and harness can be left in their current position, mainly as it is not worth the trouble to fish the old one out, and it can double as a back up if the new sensor ever has problems (provided the old one was in functioning order). 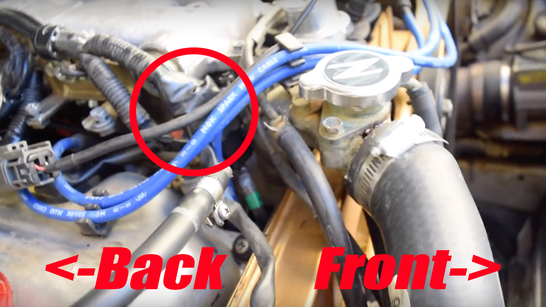 The CHTS harness connector is located behind the radiator cap along the passenger side of the intake manifold along the main engine wiring harness
For more information on the CHTS and its relocation, send us a message in the contact tab